Time goes by so fast. I'm trying to work on a new blog entry. Last night, I finally uploaded the pictures we took. Not as many as usual, but a few good ones.

Ma and Pa arrived last Monday evening - just after we returned from our Austria/Bavaria trip on Sunday evening - so we haven't had much time to blog.But I will... promise. It's great to have them here and we're really enjoying prime time (not to mention Ma's cooking!!) with them.

Today, we spent most of the afternoon cleaning up the garden, cutting (the overgrown!!) hedges, mowing the lawn. Soon, we'll be relaxing in front of Ox's Pita with shwarma marinated lamb meat and lots of freshly cut veggies AND his unbeatable garlic sauce!

So, stay tuned. Maybe tomorow evening (there's still the house to clean up), you'll find a new entry... I hope. ;)

I’m about to rename my blog to CS and O-X’s travels! It seems that we’re not sitting still much lately.

Two weeks ago, we left early on a rainy and cool Saturday morning and drove a-a-a-a-a-a-all the way up past Hanover to a little town called Varrelbusch where our good friends, Nicole, Heiko - and napping little Jennifer – (and gorgeous weather!), were expecting us. The drive went pretty well, except for a few Staus (traffic jams) and I thought the last 20km Autobahn would never end! But we finally made it in six and a half hours.

After a lot of basic chatting, Heiko realized that he’d better hurry to the Metzgerei (butcher shop) before it closed. After all, we had two BIG meat eaters there and we were all expecting a barbecue. About 20 minutes later, Nicole’s mobile phone rang and Heiko was in consternation. His favourite butcher shop was already closed! In a slight panicky voice, he asked where else he could go “hunting”. Nicole remained calm and reassured him that there must be some meat left somewhere and named two other shops. Ask Mausi. This part of Germany will never go out of meat, take what it takes!

After she hung up, she decided to go wake up the little sleeping beauty and bring her down to greet the guests. At the first sight of us, she hid behind mommy Nicole. When she did take a peek, she frowned as if asking: “Who are these intruders?” Jennifer was distant for the first hour or so, but as soon as Daddy came home (with about 5 kg of raw meat to grill!!), I think she didn’t feel as outnumbered by new faces anymore. Balance had been re-established. 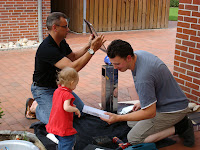 While Nicole and I were getting into some serious girls’ talk, our men started building the newly acquired grill. You’ll notice that little Jennifer is going to be one heck of a handywoman when she grows up! Men (and 16 month old) at work! Ok, she did bring screws to Daddy Heiko, but more often wanted to get the whatever he was holding right then out of his hands. 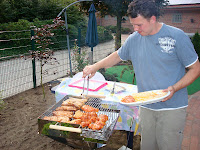 Then, little Jennifer then was fed and put to bed, and it was time for the big people (we’re not grown up, yet) to have a feast! The grill master made his way to the glowing charcoal, the let’s just say: “The heat (& meat) is on!” Yeah!! Is that a cook, or what? You can tell he loves meat! I somehow get the feeling that Heiko would jet along just great with some of the grill-masters we know! (You know who you are! 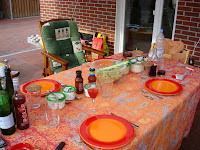 After an excellent broccoli salad accompanying an immense portion of grilled chicken, sausages and pork (I was told that there was still almost as much still in the fridge!) and many laughs, we just enjoyed a relaxing time sitting around, chatting and taking in the warm summer evening.

We then retired into our own little guest house. What? I never mentioned that? Yes! It’s like a small apartment with coffee machine, bedroom, bathroom with shower, and a cosy little living with TV. The bed was freshly made and a few chocolates were 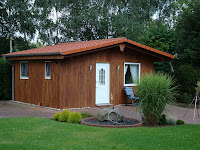 strewn over the pillow as a welcome gift. Oh. And one should NOT forget the guestbook. All guests have to write at least a little something in it before one leaves. You’ll be reminded ;) Isn't it the cutest house ever? After an excellent night of sleep, we went to the house where a huge breakfast was already waiting for us. Jennifer was running after the cats, Amanda and Antonia, but then joined us for (more) breakfast. 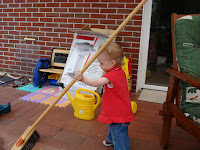 After cleaning up a bit (ok, I'll admit, the pict was taken the evening before, but it does fit in, doens't it?), we sat outside knowing that we would have to leave soon again. I hate those moments, don’t you? Time goes by much to fast! Can you believe that two years had already passed since we had been there last?? Anyway, we promised to be back as soon as possible. We had a really fun time with them and are looking forward to our next meet in Switzerland for Jennifer’s Christening.
Here's one of the last pists we took (kindly taken by Heiko). 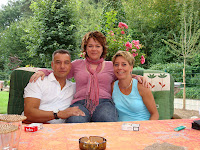 Tomorrow, we’re heading for Austria again. The first 4 days will be spent in a small, romantic (I hope) Inn in Mondsee (about 20km from Salzburg) just the two of us, then 2 days at Pinki and Andreas’ and to see Christoph (alias our adoptive son, Kevin) play live at the Backstage bar, then the last two days with Andreas and Suse a bit south of Munich.

Holidays? Really?? Well the first few days for sure, but the last?? I’ll let you know ;) Just don't expect any posts until the weekend after that. We return on Sunday late afternoon and on Monday, Ma & Pa will be spending 3 weeks with us! But don't worry. You'll hear from us.
Have a great week!
Brought to you by CanadianSwiss at 5:38 PM 9 comments: 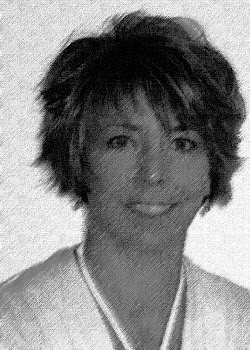